Acute mesenteric ischemia is an acute and critical disorder caused by the interruption of mesenteric blood flow. Due to the insidious onset and rapid progression of acute mesenteric ischemia, the disorder is often misdiagnosed clinically and the prognosis is extremely poor, with an overall mortality rate of 60–80% (1). Superior mesenteric artery ischemia accounts for about 40–50% of acute mesenteric ischemia cases (2). The source of most emboli is the left side of the heart, particularly in patients with atrial fibrillation. Early diagnosis and treatment of acute mesenteric ischemia are critical for the prognosis. Delayed treatment may result in intestinal ischemia and necrosis. Traditional treatment modalities include surgical incision and thrombus removal. With the development of endovascular techniques, catheter-directed thrombolysis and mechanical thrombolysis using femoral or brachial artery access have gradually replaced traditional treatment modalities. In recent years, such procedures have been attempted through the proximal radial artery. In 2017, Professor Kiemanei from the Netherlands performed the world's first percutaneous coronary intervention using distal radial artery access at the anatomical snuffbox on the dorsal side of the left hand (3). Preliminary explorations have shown that interventional treatment via left distal transradial access in the anatomical snuffbox is associated with a lower risk of radial artery occlusion and bleeding complications (4). There are no reports concerning the treatment of acute superior mesenteric artery embolism using this approach. In this article, Rotarex mechanical atherectomy was used to treat a case of acute superior mesenteric artery embolism via left distal transradial access in the anatomical snuffbox in our center.

A 73-year-old woman was admitted to hospital due to abdominal pain for 20 h. She had a history of rheumatic heart disease and atrial fibrillation, and did not receive anticoagulation therapy. No other abdominal signs were found except periumbilical and lower abdominal tenderness and absence of bowel sounds. The vital signs were normal. The electrocardiogram showed atrial fibrillation, and CT angiography of the entire abdomen showed filling defects in the middle and distal superior mesenteric artery (Figure 1). Laboratory tests showed a white cell count of 20.44×109/L, and normal coagulation profile and liver and kidney functions. Consultation of a general surgeon confirmed that no signs of intestinal necrosis were found. After informed consent was obtained, the patient underwent immediate emergency interventional surgery. 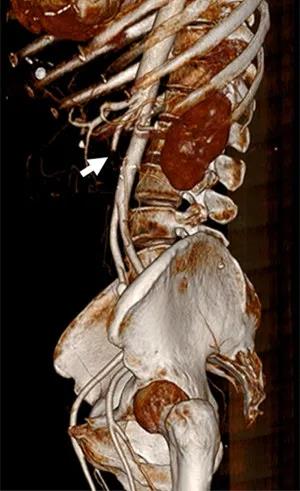 Figure 1 CT angiography of the whole abdomen showed filling defects (white arrow) in the middle and distal portions of the superior mesenteric artery.

All procedures of the case were in accordance with the ethical standards of the institutional research committee and Helsinki Declaration (as revised in 2013). Written informed consent was obtained from the patient for publication of this case report and accompanying images. A copy of the written consent is available for review by the editorial office of this journal.

The patient lied in supine position. The left arm was put on the abdomen with natural internal rotation, and the left hand was placed toward the patient’s right groin, followed by disinfection. 2 mL of lidocaine was injected into the left anatomical snuff box, and a 21 G puncture needle was inserted at an angle of 35–45 degree into the radial fossa where the pulse was the strongest. After successful puncture, a 0.25-inch J-shaped guide wire was slowly inserted, and a 6 French radial artery sheath (Braidin, APT Medical) (Figure 2) was inserted following skin incision. 3,000 U heparin was administered. Under the guidance of the loach guide wire, a 4 French ULTIMATE1 catheter (1,250 mm) was placed at the opening of the superior mesenteric artery. Angiography showed a filling defect of approximately 5 cm in the middle and distal portions of the main trunk of the superior mesenteric artery, and the distal arteries were well visualized (Figure 3). A 0.018 guide wire was inserted into the distal branch of the superior mesenteric artery, and 6 French Rotarex rotational excisional system (1,350 mm) was introduced along the guide wire (Figure 4). The thrombus was slowly suctioned from the distal to the proximal end twice. The main trunk and branches of the superior mesenteric artery were well visualized on repeated imaging. No obvious residual thrombus was observed, and distal blood flow was normal (Figure 5). 200 µg of Nitroglycerin was injected into the sheath, which was then removed, and a pressure bandage was applied for 3 h. The operation was successful and the patient did not experience noticeable discomfort. The total operation time was 40 min, and the Rotarex mechanical rotational excisional system was used for around 1 min. 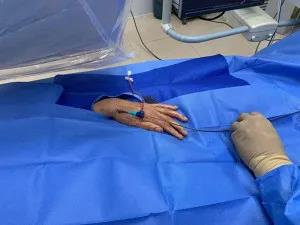 Figure 2 The 6-French radial artery sheath is inserted through the distal radial artery at the anatomical snuff box and the principles of the procedure are consistent with those of the femoral artery approach. 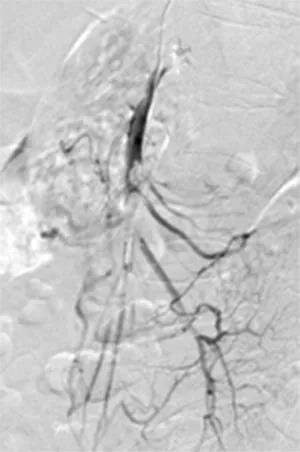 Figure 3 A filling defect of approximately 5cm in the middle and distal superior mesenteric artery and the distal arteries are well visualized. 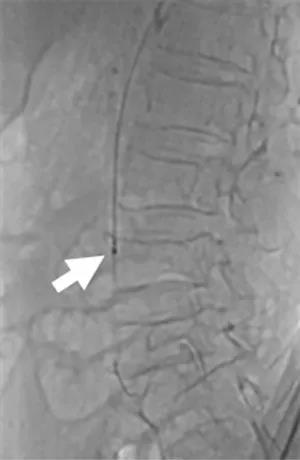 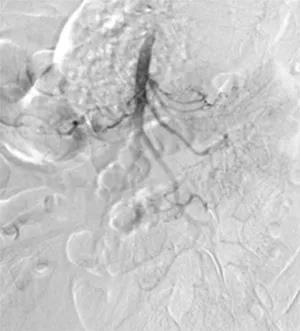 Figure 5 The main trunk and branches of the superior mesenteric artery were well visualized on repeated angiography. There was no obvious residual thrombus.


After the operation, the patient’s vital signs were stable, and she was treated with enoxaparin sodium anticoagulant therapy (Clexane, Sanofifi, Paris, France; 60 mg, IV, twice daily), as well as antibiotics and parenteral nutrition. The pressure bandage at the puncture point was removed 3 hours after operation, and there was no bleeding or hematoma at the puncture point. The skin on the fingertips was warm, without ischemic changes. 6 hours after operation, the patient reported alleviated abdominal pain and no obvious tenderness or rebound pain at the entire abdomen. On the 2nd and 4th day after operation, the patient passed gas with peristalsis, and the white cell count returned to normal. Because the intestinal blood supply of this patient was improved quickly and symptoms were relieved significantly, changes in lactate and myoglobin levels were not detected. On the 7th day after operation, the superior mesenteric artery was well visualized on whole abdominal angiography and no filling defect was found (Figure 6). According to the patient’s history of atrial fibrillation and intraoperative angiography findings as well as the patient’s age, anticoagulation therapy alone was given to avoid the risk of bleeding. 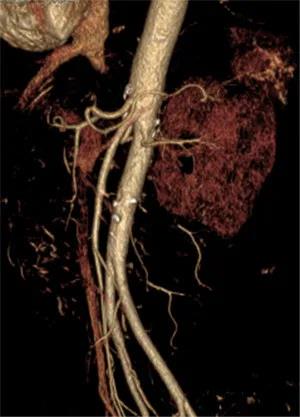 Figure 6 After operation, the superior mesenteric artery was well visualized on repeated complete abdominal CT angiography and no filling defect was found.

Surgery via femoral artery or brachial artery is the main choice for the treatment of acute mesenteric ischemia. Femoral artery is still the first choice for many surgeons due to large diameter of the vessel, easy compression to stop bleeding, anatomical familiarity and mature catheter design. However, there are several disadvantages associated with femoral artery approach. The guide wire and catheter are required to be turned back into the superior mesenteric artery at a large angle, causing difficulty or failure to deliver the mechanical thrombectomy system, and vascular complications such as hemorrhage, pseudoaneurysm, arteriovenous fistula, retroperitoneal hematoma and limb ischemia may arise. The risk is increased for obese patients and those who received antiplatelet or anticoagulant therapy (5). Some scholars have reported successful cases of superior mesenteric artery thrombosis treated via brachial artery approach. Although the difficulty in catheter delivery caused by the large angle of the superior mesenteric artery is resolved by the brachial artery approach, there are still disadvantages below: (I) during the whole operation procedures, the operator's body may be partially exposed to radiation; (II) for the abduction of the left upper limb and the left brachial artery approach, the operator has to change the surgical site, equipment in the operating room, and operating habit; (III) Brachial artery puncture may cause nerve injury; (IV) in the process of compression, complications such as pseudoaneurysm and hemorrhage may occur. Researchers have attempted new vascular approaches to reduce the onset of puncture complications and decrease the sickbed time. Recently, interventional therapy via the distal radial artery at the anatomical snuff box has attracted attention. In many studies, this approach has been used in the successful treatment of the coronary arteries, visceral blood vessels and even arteries of the lower extremities (6). This is the first time, however, that mechanical thrombectomy is performed on the superior mesenteric artery via the left distal transradial access in the anatomical snuffbox.

Since distal radial artery at the anatomical snuff box is smaller than proximal radial artery, with a diameter of 2.0–2.4 mm, the difficulty of puncture is increased and a longer period of training is required (3). Ultrasound-guided puncture of distal radial artery is a good choice to increase the success of puncture. The use of ultrasound guidance enables physicians to identify anatomical location of the vessels. Although a learning curve is needed, this approach is effective for distal radial puncture even in the presence of spasm or non-palpable distal radial artery with hematoma caused by previous failed puncture. It should be noted that McNamara et al. reported 9 patients between 1985 and 1995 who developed spontaneous thrombosis in distal radial artery at the radial fossa, with symptoms of ischemia in the index finger and thumb (12). In an oral report by EuroPCR in 2014, Kaledin reported that the incidence of distal radial artery occlusion among 656 patients treated was 1.5%. Other complications in this series included wrist and forearm hematoma (0.8%), edema (0.2%), numbness (0.6%), arteriovenous fistula (0.2%), transient ischemic attack (0.2%), stroke (0.2%), aneurysm (0.2%) and death (0.5%). It is noteworthy that no occlusion was found in the main radial artery (13). In general, Allen test is necessary before operation, and only when ulnar artery is not absent, can we perform this operation.

At present, the difficulty associated with distal radial artery puncture at the anatomical snuff box is increased, the training period is prolonged, and the diameter of distal radial artery is relatively small. Therefore, it is impossible to indwell the vascular sheath of a larger diameter, which leads to the failure of more complex procedures, and the lack of specialized longer instruments has currently restricted large-scale clinical application of this method. However, with advance in technology and equipment and increased safety and comfort concern of surgery, it is likely that interventional therapy via distal radial artery at the anatomical snuff box will become more popular.

Compared with traditional femoral artery approach, using left distal transradial approach in the anatomical snuffbox, the guide wire and catheter are not required to be turned back at a large angle for entry into superior mesenteric artery, and Rotarex mechanical atherectomy can be performed better. This will greatly reduce the risk of Rotarex operating in superior mesenteric artery. The complications such as pseudoaneurysm and bleeding caused by femoral artery and brachial artery puncture were reduced. At the same time, the development of left distal transradial approach is also limited by the long learning curve, lack of supporting instruments, and the inability to place vascular sheaths of a larger diameter for more complex procedures. However, there are a lack of randomized controlled trials which compare the effectiveness and safety of distal radial artery approach and conventional femoral artery approach, and long-term follow-up results are also absent. But it is believed that distal radial approach will gradually become more popular as an effective and safe choice for the peripheral vascular cavity. 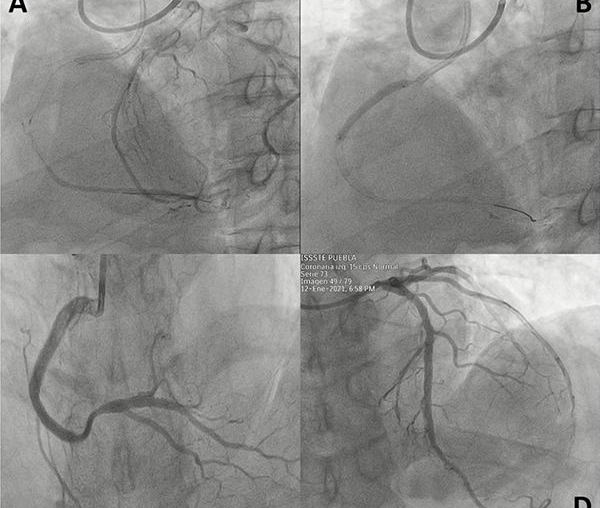 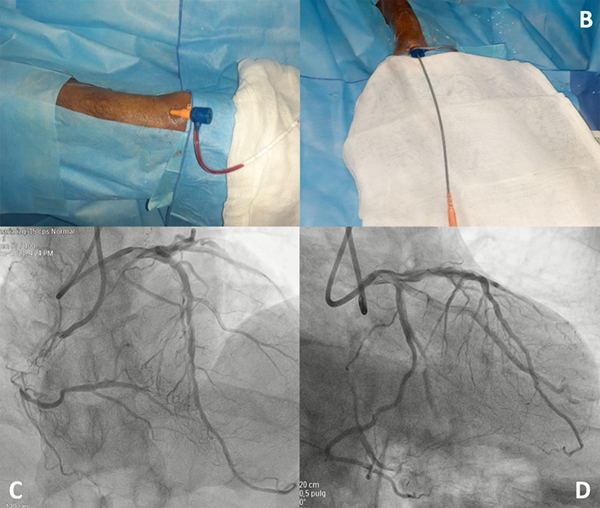